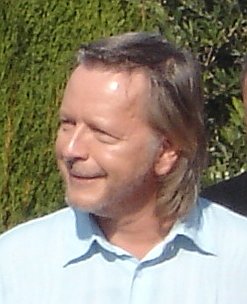 Renaud Pierre Manuel Séchan, known as Renaud (born in Paris on 11 May 1952), is a popular French singer, songwriter and actor.

His characteristically 'broken' voice makes for a very distinctive vocal style. Several of his songs are popular classics in France, including the sea tale "Dès que le vent soufflera", the irreverent "Laisse béton", the ballad "Morgane de toi" and the nostalgic "Mistral gagnant".

His early work is characterized by a volatile temperament, innovative use of French, and edgy, dark, left-wing social and political themes. Raised in an educated milieu, he adopted the looks and attitude of working-class youth in the 1970s, and reflected this in his lyrics. A recurrent theme is his disgust for the average French people with petit-bourgeois preoccupations and right-wing leanings (see beauf). His music focuses on the disparity between classes, the abuse of political power, overbearing authority and disgust for the military, with rare glimpses of tenderness for his fellow humans, the planet earth, and art.

In the later 1980s and 1990s Renaud's work was distinguished by "softer" subjects such as his wife Dominique, his daughter Lolita and his friends, as well as the late comedian and singer Coluche for whom he wrote the tribute "Putain de camion" ("Bloody Lorry") after Coluche's death in a road accident.

Renaud made a very significant comeback with his 2002 album Boucan d'enfer. That album's iconic hit was "Manhattan-Kaboul", a powerful duo with Axelle Red.

Some Renaud songs may be found from this page.